The Ellipsys vascular access system (Avenu Medical/Medtronic) can be used to easily and safely create durable percutaneous arteriovenous fistulas (pAVFs) for haemodialysis—with new, long-term data suggesting it offers an “excellent alternative” to AVF creation via surgical procedures in end-stage renal disease (ESRD) patients. That is according to Jeffrey Hull, an interventional radiologist and director of the Richmond Vascular Institute in Richmond, USA, who presented five-year results from the Ellipsys US pivotal trial at this year’s American Society of Nephrology (ASN) Kidney Week (2–7 November 2021, virtual).

And, speaking to Vascular News shortly after this event regarding the role endovascular AVFs now play within access creation strategies, Hull stated: “Once you get past the wrist issue, I would say it could be percutaneous fistula first. If you are a candidate for a fistula, but not a great wrist fistula candidate, then maybe the first possible fistula that should be considered for you is a percutaneous fistula—and I think the data are promising enough to support this.”

Hull began his ASN Kidney Week presentation by briefly demonstrating the procedure through which a proximal radial artery fistula is created using the Ellipsys system—noting the application of pressure and heat to “weld” the target vein and proximal radial artery together. This differs from more traditional, surgical procedures in which suturing is used to create the anastomosis between these vessels, he added. Hull also noted that balloon dilatation is commonly used to relieve spasm in the anastomosis shortly after the procedure.

He went on to provide the audience with an overview of the Ellipsys US pivotal trial, a prospective, multicentre, single-arm study intended to evaluate the safety and effectiveness of AVF creation using the Ellipsys device. It involved a total of 107 patients treated across five outpatient, office-based labs, he reported, adding that—aside from the fact 76 (71%) of these patients were male—the baseline characteristics of these patients were “typical of those seen in dialysis patient populations”, with a mean age of 56.6 years and an obesity prevalence of 50%.

Moving on to discuss one-year data from this trial, Hull reported a technical success rate of 95% (102/107 patients) and a clinical success rate of 95% (98/103 patients), with an average procedure time of 24 minutes also being observed. He added that the target vein was the cephalic vein in the majority of cases (74%), followed by the basilic (24%) and brachial (2%) veins. Discussing methods used to increase blood flow through the anastomoses created in the trial—referred to as maturation procedures—Hull noted that percutaneous transluminal angioplasty (PTA) proximal to the fistula was used in 72% of cases, while branch (35%) and deep (32%) embolisation, cubital vein ligation (31%) and transposition (26%) were also deployed.

Hull then noted that, at one-year follow-up, fistula-related events including thrombosis, stenosis, cannulation-related injuries or difficulties, and steal syndrome, generally looked “very similar” to those seen in surgically created fistulas—something that he stated was “a little disappointing” at that stage. He did add, however, that the Ellipsys US pivotal trial met its primary efficacy endpoint, as 86% (92/107) of fistulas were mature at 90 days, and met its primary safety endpoint, due to there being no serious, device-related adverse events.

Discussing the crux of his ASN Kidney Week presentation, Hull reported that a total of 85 patients were eligible for further follow-up at one year and the trial’s investigators continued to follow up these patients out to five years. Regarding the first of several long-term endpoints—fistula use, assessed by two-needle cannulation—Hull told the audience that 92% (83/90) of these fistulas were used in patients requiring dialysis, describing this as “an excellent outcome” that compares favourably to the 63% rate of two-needle cannulation observed in US patients with surgically created fistulas. He further noted that fistula non-use was low, with 11 of the 24 patients whose percutaneous fistula was unused ultimately not requiring haemodialysis.

Outlining access complications through five years, Hull said 27 patients experienced complications including fistula dysfunction (21.2%), cannulation injury (12.9%), thrombosis (5.9%) and arm swelling (4.7%)—with these being typical of those seen in dialysis patient populations. A total of 91 additional procedures were performed to rectify these issues, he stated, with the most commonly observed types being balloon dilatation (n=71) and thrombectomy (n=12), followed by stent grafting (n=6) and surgical repair (n=4).

Hull also noted, regarding additional procedures per patient per year in the US pivotal trial, that this figure (2.66) was similar to those associated with surgically created fistulas at one year, but that in years two through five a “drastic reduction” in additional procedures per patient per year—ranging from 0.18 to 0.57—was observed. “We attribute that to the low-to-moderate flow in these [percutaneously created] fistulas, averaging 1,000ml per minute, and also the multi-outflow feature of these fistulas whereby, if an injury occurs, the blood will flow around it and keep the fistula operational until it can be repaired,” he reported.

Touching on the final long-term endpoint from the trial, Hull relayed “excellent” primary assisted and secondary patency rates of 74% and 82%, respectively, at five years as per Kaplan Meier estimates, while the functional patency rate was found to be 91.8% through the follow-up period as well. “In summary, this follow-up study has shown us several important things—the first being that high-quality fistulas can be performed by interventional nephrologists,” he concluded. “Secondly, we have expanded the places in which these fistulas can be created, not just in the hospital but now in office-based labs and ambulatory surgery centres too.”

In addition to reiterating the high fistula usage, positive long-term patency outcomes, and low complication rates and subsequent maintenance procedures, seen through five years in the study, Hull ended his presentation by noting that, moving forward, the goal is to reduce the time to two-needle cannulation for the Ellipsys system, with cannulation- and cost-related issues also continuing to be evaluated further. 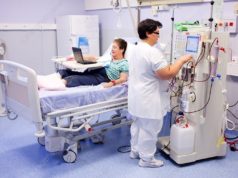