Principal investigator Timothy Sullivan (Abbott Northwestern Hospital, Minnesota, USA) presented the two-year findings at this year’s Charing Cross Symposium (CX; 15–18 April, London, UK) in a Podium 1st session. He explained: “We know that swirling flow creates increased wall stress in the arterial wall, which is atheroprotective, and this is especially important in the superficial femoral artery where, under normal circumstances, shear stress is quite low. The use of a helical stent produces swirling flow and increased wall shear stress.”

MIMICS-2 is an international investigational device exemption (IDE) study to evaluate the safety and efficacy of the BioMimics 3D stent system (Veryan Medical) in patients undergoing endovascular intervention to relieve obstructive or occlusive disease in the femoropopliteal artery. The three-year, prospective, single-arm trial is tracking outcomes in 271 subjects with a mean age at baseline of 68.4 years, across 43 sites in the USA, Germany and Japan.

About 50% of patients had diabetes mellitus, and the majority were in Rutherford categories 3 and 4: “These were patients with significant clinical symptoms related to lower extremity arterial claudication and a baseline ankle-brachial index of 0.7, representing patients that we all would treat in our clinical practice, typically with lower extremity intervention following a trial of exercise therapy.”

Device and technical success was 100%. The primary safety endpoint of freedom from major adverse events (death, major amputation, or clinically-driven target lesion revascularisation [CD-TLR]) at 12 months was achieved for 99.6% of subjects.

At 24 months, freedom from CD-TLR was 84.2% and “compares quite favourably to that at 12 months, which was 89%,” said Sullivan. “The [Kaplan-Meier] curve really starts to flatten out at about 360 days, without much loss in clinically driven-TLR.”

This performance at two years is similar to that of drug-eluting stents (DESs) and drug-coated balloons (DCBs), despite the MIMICS-2 subject cohort including a greater proportion of challenging cases than those in pivotal DES/DCB trials. Imaging confirmed there were no cases of stent fracture in any of the MIMCS-2 subjects, including those who have reached three-year follow-up.

Sullivan concluded: “Swirling flow with this BioMimic stent creates increased shear stress at the vessel wall, which is atheroprotective without the use of an antiproliferative drug.” The positive outcomes were achieved independent of lesion complexity—at the start of MIMICS-2, 45.9% of subjects had moderate to severe legion calcification. The Kaplan-Meier estimate of survival from CD-TLR at 24 months for those in this group was 85.5%. Sullivan told Interventional News: “What these data tell me is that, in complicated patients with very calcified lesions […] when a device becomes available for general clinical use in the USA, I will be using it for long or calcified lesions, […] in which I might otherwise have used one of the other treatment algorithms, with the confidence that restenosis is going to be minimal. The results shown are pretty amazing after two years.” CX 2019: Number of vascular surgeons being trained is “woefully inadequate” 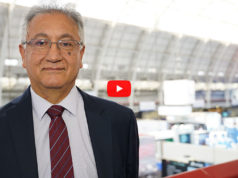