In a newly released “focused update” to their 2019 recommendations, the European Society for Vascular Surgery (ESVS) abdominal aortic aneurysm (AAA) guidelines writing committee has published advice on the surveillance and management of patients treated with the Nellix endovascular aneurysm sealing (EVAS) system (Endologix).

The committee advises that all patients in whom a Nellix device has been implanted “should be identified, properly informed and enrolled in enhanced surveillance.” If device failure is detected, it states that “early elective device explant should be considered in surgically fit patients”.

The alert, authored by Jon Boyle (Cambridge University Hospitals NHS Trust and University of Cambridge, Cambridge, UK) et al, was published online ahead of print in the European Journal of Vascular and Endovascular Surgery (EJVES).

Boyle and colleagues note that they performed a scoping review of risk for late serious aortic-related adverse events in patients treated with EVAS for AAA based on a literature search in PubMed up to 7 December 2022. Following synthesis of the available evidence, the writing committee agreed on recommendations graded according to the European Society of Cardiology (ESC) grading system.

“EVAS has a very high incidence of late endograft migration resulting in proximal type 1 endoleak with risk of rupture, requiring open conversion with device implant,” the authors write, detailing their key finding from the review. They add that the reported mortality for elective explantation varies between 0% and 14%, while acute conversion for rupture has a “very dismal prognosis” with 67–75% mortality.

The authors detail that ESVS guidelines are renewed every five years or so, and that ESVS focused updates are issued “to convey important new data that have emerged in between the publication of the full guidelines, that affect patient safety or impact decision-making or management of the patients”.

In their 2019 guidelines on the management of abdominal aortoiliac artery aneurysms, the writing committee recommended that “conceptual new technologies, such as [EVAS], should only be used within studies approved by research ethics committees and with informed consent, until properly evaluated”.

In May of last year, Endologix ended production of the Nellix EVAS system, based on reportedly higher rates of leaks around the device’s implantation, endograft migration and aneurysm sac enlargement. The guideline committee recognised, however, that there was no clear guidance on surveillance and management of patients who have already undergone AAA repair with an EVAS device. It was for this reason that the ESVS AAA guidelines writing committee initiated a literature review on the topic. “The current accumulated knowledge suggests that patients treated with EVAS for AAA may be at high risk for serious aortic-related adverse events, which justified an updated guidance on the surveillance and management of patients already treated with EVAS,” they write in the new paper.

Commenting on the timing of the alert, the committee note that they decided it was important to publish before the fully updated guidelines will be available in 2024, “to highlight the issues with EVAS failure, to promote patient safety and to encourage clinicians to identify all patients in whom a Nellix device has been implanted”. 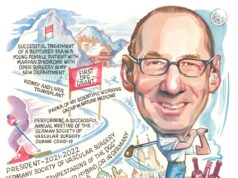